Annie Did Not Steal Trousers to Buy Cocaine

The headline in one of the America’s biggest newspapers read that she was in prison for “stealing the trousers of a negro in order to get money with which to buy cocaine.”   She was “adopted” by one of the masterminds who dealt the United States one of it’s biggest military defeats of the 19th Century.  She could be considered one of America’s first movie stars and her husband was so distraught upon her death that he died just 18 days later.

Annie Oakley was a five foot tall American legend. She thrilled audiences around the world with her 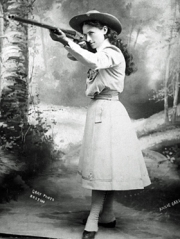 daring gun shooting exploits. She helped fuel turn-of-the-century nostalgia for the vanishing mythical American West, even though she never lived west of the Mississippi.  A champion in a man’s sport, she forever changed ideas about the abilities of women, yet she opposed the suffrage movement. Her fame and fortune came with her self taught skills with a gun, yet she was a Quaker.

Little Annie was born Phoebe Anne Moses in the woods of Ohio and first picked up a gun at the age of 8.  She taught herself the use of firearms as a way to help her struggling family by shooting quail, squirrels, and other small animals then selling her take to local markets and families. Thanks to her prowess with various weapons, she became her household’s primary breadwinner and developed a reputation as quite the shot.

Frank Butler was also making himself a name as a marksman and on a trip to Ohio, he challenged a local hotel owner to a $100 bet ($2300 in todays dough) that he could beat anyone around. Frank was very surprised when a 15 year old, five foot tall, 100 lbs. girl took the challenge. He not only lost the match, but Annie won  his heart. They were married soon after and toured as Butler and Oakley (Oakley is the name of a small province in Ohio), the name that Miss Moses adopted.

Annie dazzled crowds around the country first on the variety circuit, then the circus, then finally with

Buffalo Bill’s Wild West show. There she was “adopted” by Chief Sitting Bull, main architect of the Battle of Little Bighorn (also known as Custer’s Last Stand) where 268 soldiers of the 7th Calvary were killed. Sitting Bull called her “Watanya Cicilla” (which means “Little Sure Shot”).  Oakley amazed audiences by splitting playing cards in two (edge to edge) from ninety feet.  After stopping at 40 cities around America she and the Wild West Show hit Europe in 1889 going to The Paris Exposition. The Wild West show travelled all around Europe where she entertained the likes of Oscar Wilde, Queen Victoria, the King of Italy, President of France and other crowned heads of state. Oakley had such good aim that at his request, she knocked the ashes off a cigarette held by newly crowned German Kaiser Wilhelm II.  It was the stuff of stardom.

After meeting Tommy Edison in Paris she agreed to go to his studio in New Jersey where Tom filmed her with his new invention called a kinetograph, a primitive device which was the forerunner of the movie camera. She was filmed shooting glass balls which were filled with powder and feathers, which for the times was very dramatic.  The film became hugely popular and spread her fame further.

With Fame so often comes trouble and that is what the scumbag William Randy Hearst tried to strap on little Annie.  In 1903 he printed a story in his newspapers that Annie was in prison for theft which she did in order to maintain her coke habit.  Though completely false, the story was picked up by newspapers from coast to coast. Annie was pissed and though many newspapers issued an immediate retraction she ends up filing 55 libel suits. The legal battles would run another 7 years with Annie traveling back and forth across the country to testify.  The evil Hearst hired a detective to visit her home town to get dirt on Annie, but this time his smear campaign failed. Too clean to smear. She collected a lot of dough from the libel suits, but lost income and time in doing so.

Annie retired from showbiz (in her 60’s) and she and Frank bought a place in Pinehearst, North Carolina.  They went to visit Buffalo Bill, who had made foolish investments, was an easy mark, and whose health was failing. Creditors had been selling off his possessions and bankruptcy was in the cards.  Finally, their old friend passed away in Denver, CO in 1917.  Annie wrote “William Frederick Cody was the kindest, simplest, most loyal man I ever knew…. The personification of those sturdy and lovable qualities that really made the West.” 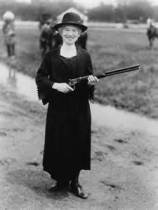 At the start of World War I, Annie wrote a letter to the Secretary of War that she was willing to gather a troop of “sure shot” women to help in the war effort.  He thanked her, but declined.

Annie and Frank moved back to her home town of Greenville, Ohio and on Nov. 03 1926 she died of

natural causes. She was 66 years old. After the death of his beloved wife Frank Butler refuses to speak, eat, or drink and dies 18 days later.  They were married for 50 years.

Annie Oakley should get the nod for being one of the first female international superstars  and she spread her sharp shooting skills to over 130 cities around the world. The Irving Berlin musical “Annie Get Your Gun” came out in 1946, was an immediate hit, and still plays today.

One of the hit songs from the musical is “There’s No Business Like Show Business” which was originally sung by the first “Annie,” the great Ethel Merman.  If you ever see Nancy Doyle or Ann Banning Wright on the streets of America they will break into that song with little provocation and do it Ethel Merman style.  A sight that enchants the senses and delights the ears. Please let me know if you have had that pleasure. Groove.

4 thoughts on “Annie Did Not Steal Trousers to Buy Cocaine”