Archive for the tag “WW1”

Did I just Sneeze or is That the Tallest Man in the World ? 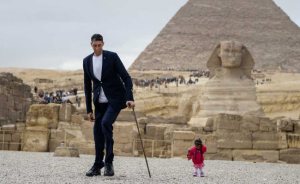 There is lots of useless information roaming around our little skulls. There are some epochal moments that we rightfully retain, but what is important to some might not be important to others. Do we need to know the difference between peanut brittle and peanut brickle?  No we don’t. Do we need to know if Daryl Hannah lusted for Neil Young when she was with Jackson Browne? I say not important. Do we need to know why the Egyptian Culture and Tourism Ministry thought it was a good idea to show the worlds tallest man 8’3″ Turkish farmer Sultan Kosen, with the smallest woman in the world 22 inch Jyoth Amge from India, in front of the Gizah Pyramid as a way to promote tourism for Egypt? Let it slide.

But I have come across something that was and is important and it touches on current issues and events:  that the 1918 Spanish Flu pandemic was the deadliest disease outbreak in human history. It killed, in 15 months, more than AIDS has killed in 40 years and more than the bubonic plague killed in a century. It is estimated that it took the lives of 50 to 100 million people worldwide. Close to 700,000 Americans died. 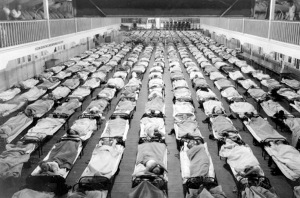 It is thought to have started in Haskell County, Kansas. It was reported that soldiers from Haskell County went to Camp Funston in central Kansas then came down with the flu.  Then soldiers from Funston went to other Army camps across the nation and eventually to Europe to fight in World War I. Few alarms went off indicating that this was something to be taken seriously. Due to the war, most countries involved gave it little attention because they wanted to keep their fighting resolve in high gear. The only attention it got was when it swept through 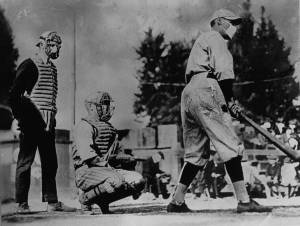 UNITED STATES – 1918: Baseball players, one batting & one catching, with umpire standing behind plate, wearing masks which they thought would keep them from getting flu during influenza epidemic of 1918. (Photo by Underwood)

Spain and sickened the King. The press in Spain, which was not at war, wrote extensively about the disease unlike the censored press of the warring countries (including the U.S.) Hence the name ” Spanish Flu”.

What also proved to be deadly was the lack of acknowledgement from authorities that this disease was killing tens of thousands from Alaska to Africa every day. Against this background, while influenza bled into American life, public officials who were determined to keep moral up, started to lie. An official stated “Truth and falsehood are arbitrary terms… the force of an idea lies in its inspirational value. It matters very little if it is true of false.”  “There is no cause for alarm or panic” said 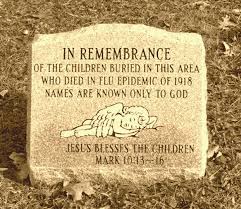 officials. Meanwhile death was at the door. 12,000 people died in Philly in 6 weeks, 53% of the population of San Antonio got sick, 14 % of the inhabitants of Fiji died in 16 days, and in some villages from Alaska to Gambia -everyone died.  50% of all U.S.deaths in WWI were caused by the flu. Many survived the illness (Ray Chandler, Walt Disney, Georgia O’Keefe, FDR, and Woody Wilson), but many did not (both the Dodge Brothers ( co-founders of the Dodge car company), Phoebe Hearst (mom of William Randolph Hearst) and Fred Trump (grandfather of current President.) 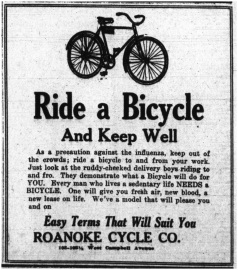 All this happened 100 years ago and there is no current pandemic on the horizon. There are steps to be taken to ease one’s mind when thinking about the flu. Some get flu shots, some wear masks, others drink more rum. This is important stuff to be aware of.  It was not that long ago and if something like this happens again we can only hope that the Powers That Be don’t manage the truth, but tell the truth. Groove. 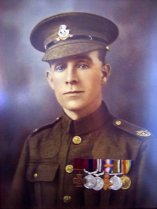 We make choices hoping they are the right ones, but sometimes even the grandest rights can turn into the most horrible wrongs. Helping a stranger then having your wallet stolen by him. Giving a hitch hiker a ride only to have him throw up in your car.  I have suffered these good deeds that turned into regrets, but that is nothing compared to what happened to Henry Tandey.

Henry Tandey had him in his sights. His Lee-Enfield rifle had not let him down once during World War I and it was a clean shot. Henry had won the Victoria Cross (the highest and most prestigious award for gallantry in the face of the enemy awarded to a British soldier) and numerous other medals making him the most highly decorated British private of the First World War. Had Henry been an officer there is little doubt that knighthood would have followed. It was at the battle at Marcoing, France in October 1914 that a weary German soldier wandered into Henry’s line of fire. The enemy soldier was wounded and did not make an attempt to raise his rifle. He stared at Henry expecting the inevitable. The twenty-seven year old Tandey choose not to shoot. “I took aim, but couldn’t shoot a wounded man” said Tandey, “so I let him go”. The

German soldier saw him lower his rifle and nodded his thanks before wandering off.  The twenty-nine year old German soldier was a Lance Corporal of the Bavarian Infantry Regiment. His name: Adolf Hitler.

Henry put the encounter out of his mind and rejoined his regiment, discovering soon after that he had won the Victoria Cross. In newspapers around England a picture of Henry carrying a wounded soldier after the Battle of Ypres was published.  It was a dramatic image which symbolized a war which was supposed to be to end all wars, and was immortalized on canvas by Italian artist Fortunino Matania. Leaving the army in 1926 at the rank of sergeant, Henry settled in Leamington, England where he married, settled into civilian life, and spent the next 38 years as a plant security chief at Triumph Motors, then called Standard Motor Company. He lived a quiet life and although regarded as a hero he rarely mentioned his participation in ” The Great War.” 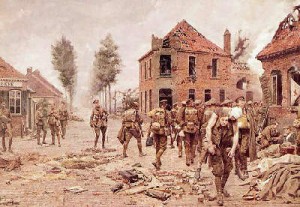 In 1938 England’s Prime Minister Neville Chamberlain made his trip to Munich to meet Hitler in a last ditch effort to prevent World War 2 which resulted in the ill-fated  “Munich Agreement” (“Peace in our Time”). During that ominous trip Hitler invited Chamberlain to his newly constructed retreat in Berchtesgaden, Bavaria which was a birthday present from the Nazi Party. While there, Chamberlain found a reproduction of the Matania painting depicting Tandey carrying his wounded comrade. Puzzled by his choice in art Hitler explained ” that man came so near to killing me that I thought I should never see Germany again, providence saved me from such devilishly accurate fire as those English boys were aiming at us.”  Hitler seized the moment to have his best wishes and gratitude conveyed to Tandey by the Prime Minister, who promised to phone Henry upon his return to England which he did.  Tandey’s nephew remembers his uncle getting up to answer the phone and matter-of-factly returned  mentioning that the Prime Minister called and said that he just returned from seeing Hitler and he saw the painting and when Chamberlain asked why it was there Hitler commented ” that’s the man who nearly shot me.”

Things went sour for old Neville. His appeasement to Hitler was a major blunder, he lost power to Winston Churchill, and died of stomach cancer within 2 months. The Tandey / Hitler  story broke in 1940, but no one gave it much thought at the time. In 1940 Henry told a 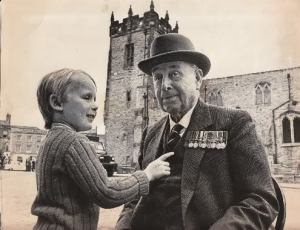 journalist ” if only I had known what turned out to be. When I saw all the people, women and children he had killed I was sorry to God that I let him go.”

Henry died in 1977 at age 86 and had his ashes spread along side his fallen comrades at the British Cemetery in Marcoing, France. He must have been haunted as time revealed what a monster Hitler was and his act of great decency to a very indecent man was a strong example how a right can be made wrong. So here is to our rights staying rights and I think that is a toast worth drinking to. Groove.