Archive for the tag “Vin Scully”

Join Us in Protest 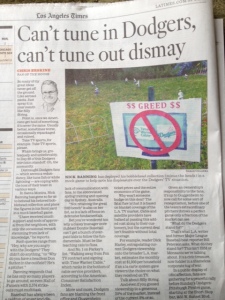 Like a tasty wedding cake except without all the damn complications, Groove Central LA showed up in the Los Angeles Times sports section (in an article by the great Chris Erskine) by making a headless Bobblehead (bobbleteers) protest baseball game in the front lawn.  As diplomatic as an artillery bombardment, this statement is 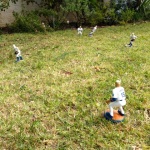 games and missing out on perhaps Vin Scully’s last year. These are high crimes and misdemeanors and put all Dodger fans in liverish moods. Perhaps We fans have failed to persuade – so now it is time to demonize. Join us at the rally 3 pm at the Shortstop Bar in Echo Park this Sunday (June 1). Is not being

able to watch Dodger games akin to the burning of the library of Alexandria? Perhaps not, but it is a blight on the joyous side of our existence and must not continue.   Link to article:  http://www.latimes.com/sports/dodgers/la-sp-dodgers-tv-erskine-20140529-column.html Join Us in Protest!

We know them and love them : Sandy (Koufax), Steve, (Garvey), Davey (Lopes), Ron (Cey), Bill (Russell), Don (Drysdale), but what about Pop (Corkhill), Oyster (Burns), Hub (Collins), Adonis (Terry) and Needles (Foutz).  We recognize the first group of names as the true blue Dodgers of our immediate past, but those other names are early descendants having played on the Brooklyn teams that had many names. The Dodgers were originally founded in 1883 as the Brooklyn Atlantics, taking the name of a defunct team that had played in Brooklyn

before them. Then came the Brooklyn Bridegrooms (because so many team members were getting

married), then the Grooms, the Superbas (which I will now call the Dodgers after I’ve had more than one cocktail), the Robins, The Trolley Dodgers, before finally becoming the Dodgers.

The Dodgers greatest rivals are the Hated Ones (or Giants) of San Francisco.  Both teams moved to California in 1958 and while the teams were based in New York, the Giants won 5 World Championships (like saying the Egyptians made fine pyramids, it’s ancient history…..who cares) and the Dodgers just one. Since moving to modern times (west coast) the Dodgers have won 5 World Championships (there is no doubt that number will increase in the near future) with the Giants struggling to win 2.   Life goes on and as the ink dries on this paper the

Dodgers have a 15 1/2 game lead on the lowly last place Giants with the San Diego Padres desperately trying not to dip into the basement while pondering still another uniform change (Can you say branding?).  The Dodgers have had the same uniform for 70 years.

As we all know, rooting for your baseball team can be a cruel and fickle maiden, but listening to the

honeyed voice of Vin Scully, (calling the Dodger games since 1950 …. “He’s a left handed batter and we understand his father makes wind chimes out of used toothpicks”) and loving the Dodgers, and the game of baseball, we are all lucky to be part of this wonderful ride of 2013.  Go Dodgers!