Archive for the tag “curveball” 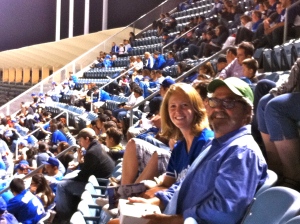 My kids have always loved baseball probably because I do too. The look on their faces as we turn the corner and see the field at Dodger stadium is the same look as they had when they were young opening presents on Xmas morn. Though they have seen this field dozens of times – it is always the same: a look of wonderment, hope, and pure delight.

Recently at a night game my daughter Lily spotted a strange light emitting a soft yellow glow from the far reaches of the parking lot behind right field. As it turns out it comes from a lantern that was erected in 1965 inside a Japanese garden that was built by the O’ Malley family during the construction of Dodger Stadium in 1962. A Japanese sportswriter legend named  Sotaro Suzuki was invited to the grand opening of the stadium and he was so taken with its magnificence that he commissioned a stone lantern to commemorate the lasting connection between The Dodgers and the nation of Japan. One can visit this place and imagine Walter O’Malley meditating on the single bench clearing his large head with visions of the fleet-footed Maury Wills stealing bag after bag and reaching harmony and the ultimate serene mode of consciousness with the thought of Sandy Koufax’s curveball.

So next time you find yourself in the far reaches of parking lot six look to the Garden and remember that Tommy Lasorda was given the Order of the Rising Sun and bow to the Enlightenment that is Dodger Stadium.