How Dry We Were

I always thought I would be a better gangster than a spy.  I think my weaknesses could be easily exploited as a spy and my general attitude is closer to a gregarious Highwayman than a secret operative.  One thing is certain, if one’s goal in life was to be a gangster, Prohibition (1920 -1933) was the time to shine.

Prohibition turned this country upside down. It started an avalanche of change in areas such as international trade and speedboat design; turned moonshine running in large engined stock cars into the nascent of NASCAR; brought in the social aspect of home drinking, dinner parties and women drinking in establishments (during Prohibition that meant speakeasies. Prior to Prohibition women were not welcomed in saloons);  provoked the start of the first nationwide criminal syndicate;  fundamentally changed the role of the Federal government; and generally changed the way we live.

When Prohibition grabbed the throat of the American public in 1920, it produced many strange bed fellows.  It’s supporters included organizations that embraced the dry side of life such as the Coca-Cola company (founder Asa Candler thought that no booze would mean more people would be rotting their teeth with his product);  the Woman’s Suffrage movement (Susan B. Anthony gave her first speech to a group called Daughters of Temperance); theatre owner Lee Shubert (who longed for the Broadway bars to empty and their occupants to fill his theatres); most Southern Democrats (Dem. Representative John Newton of Arkansas tried to make the case that Prohibition would bring an end to southern lynchings, for fewer black men would commit horrible crimes if liquor was unavailable); the Baptist and Methodist clergy (“under slavery the Negroes were protected from alcohol and consequently they developed no high degree of ability to resist their effect); three-time presidential

candidate William Jennings Bryan (the great attorney and notorious “wet” Clarence Darrow called Bryan”The Idol of All Morondom”); and the Ku Klux Klan – who were anti-Jewish (hated the likes of the Canadian Bronfman family’s Seagrams Empire), anti-Catholic (they called the Catholic Church “the Mother of ignorance, superstition, intolerance, and sin) and anti-immigrant (hated foreign German brewers such as Busch, Pabst, Hamm and Schmidt).

The beer brewers were fighting the strong arm of Prohibitionists by representing themselves as honorable providers of nourishing beverages for the working class. Some attempted to assign to beer the virtues of Mothers milk. A beer advertisement depicted a handsome women cradling a baby in her left arm and gripping a stein in her right with the slogan “Lager’s amber fluid mild,/Gives

health and strength to wife and child”.

The fiercest advocate of the brewers anti-Prohibition campaign was the most accomplished man in the industry, Adolphus Busch. The youngest of 21 children of a prosperous Rhineland merchant, he came to the States in 1857, fought for the Union army in 1861, went into the brewery supply business, and at the age of 22 married 17 year old Lilly Anheuser, the daughter of one of his customers.  Adolphus soon took over the management of his father-in-law’s business and in time changed the name to Anheuser-Busch. Busch was a true visionary in the way that he saw the brewery business as the core of a

vertically integrated series of businesses. He built glass factories and ice plants. Got into manufacturing refrigerated rail cars and truck bodies which were then used by his pal Phil Armour of the meatpacking family. He pasteurized his beer which allowed him to ship it long distances. He paid a million dollars for exclusive U.S. rights to a novel engine technology developed by his countryman Rudy Diesel. In 1875 Busch produced 35 thousand barrels of beer; by 1901, mostly because of his new light lager he named for the Bohemian town of Budweis, he surpassed a million barrels. The guy spoke 5 languages, had very cool facial hair, built huge pads in St.Louis, Pasadena, Cooperstown, and in Germany. When He and Lil celebrated their golden anniversary it was celebrated in 35 cities. Oddly enough, he never drank his own beer, referred to it as ” that slop,” and drank wine instead. Adolphus Busch died at the age of 74 of cirrhosis of the liver.

Another cat who  was involved in the booze trade was Eliot Ness, but he was on the side of the bad guys (he wanted to stop the flow of booze).  When most think of a “Prohibition Agent,”  Eliot Ness comes to mind with images of Bob Stack  from the “Untouchables” TV series that ran from 1959 to 1963 (and countless reruns.)  Stack was the star of the show, but during it’s 4 year run such co-stars as Peter Falk, Lee

Marvin, Babs Stanwyck, Marty Landau, Telly Savalas, Jack Klugman, and many others shared the screen with Bob) or Kevin Costner (from the 1987 movie with the same name). Visions of Ness stopping Al Capone and his gang were mostly fiction developed by the media friendly Ness himself. The real Ness, though he was a minor annoyance to Scarface Al by raiding a few breweries with highly publicized events, he had almost nothing to do with the conviction and imprisonment of Al on tax evasion charges. Ness tried to become an FBI agent, but came up short.  He moved to Cleveland where he ran for mayor and lost by a 2 to 1 margin. Married 3 times, Eliot started hitting the bars jabbering about his crime fighting exploits and died in 1957 of a massive heart attack at the age of 54, a big boozer. 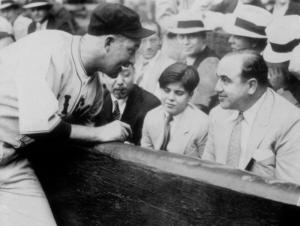 And from the GroovecentralLAWierdness File : Al Capone had one son, named Sonny, who was born with congenital syphilis, which his father contacted years before, (Wow, thanks

Dad.) who lived a peaceful non-crime life.  Sonny married, had 4 daughters, and lived in Miami. In high school he was friends and classmates with Desi Arnez who along with his wife Lucille Ball started Desilu Productions, which in 1959 produced the TV series ” The Untouchables.”

Prohibition was a failure in almost every respect imaginable. It encouraged U.S. citizens to be criminals and lie.  The balloon of hypocrisy was never so filled with hot air.  It deprived 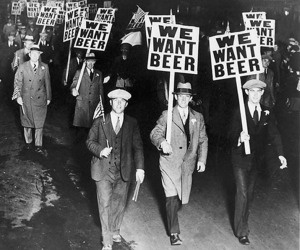 the government of revenue, stripped the gears of the political system, and imposed unjust laws on our individual rights. It released the nasty confluence of bribery, blackmail, corruption, and lawlessness upon the good citizens of this country.  The only thing that Prohibition did successfully during it’s nearly 14 year reign: we drank less.  In fact Americans continued to drink less

decades afterward. In the years prior to Prohibition, average consumption of pure alcohol ran to 2.6 gallons per adult per year – roughly the equivalent of 32 fifths of 80-proof booze or 520 bottles of beer. The quantity was slashed by 70% during the first years of Prohibition. It started to climb as American thirsts adjusted to the new regime, but even Repeal did not open the spigots: the Pre-Prohibition per capita peak of 2.6 gallons was not again attained until 1973 (Nixon era).  It stayed that high until the current level of 2.0 gallons.

During the days of Prohibition there were no closing times, very little age regulations, and a sense of sneaky/fun tension with the pressure to drink

and keep on drinking. Now there are state by state codes, licensing and regulations on closing hours, age limits, and the distance from churches, schools, and hospitals. However, the hypocrisy continues to this day: The

Jack Daniels Distillery operation is in Lynchburg, Tennessee – which is a dry county  – so they can make the stuff there, but you can’t buy it there. Another example, Mississippi remained dry till 1966, but for years a 10% tax on illegal sales remained in place, which basically encouraged the state to encourage law breaking.

I say a toast to the demise of Prohibition is due next time you have alcohol in your hand. And let us hope and pray that that era and that type of thinking is behind us. Perhaps Prohibition proved the nation could not legislate personal morality and we should use these lessons when confronting similar situations. I shall drink to that.  Groove

I again borrowed shamelessly from a wonderful book called ” Last Call ” by a terrific writer Daniel Okrent. My apologies.

3 thoughts on “How Dry We Were”