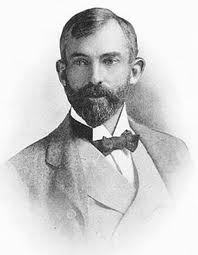 ” Get your I-ON-A-CO electric belt.”” It ironizes your iron and cures everything from baldness, cancer, tuberculosis, diabetes and almost any other disease and will change your hair back to its original color.” Ravings from a “pompous-fake,”  a “pointed bearded charlatan, “a natty dressed quacksalver”?  Henry Gaylord Wilshire  was all those things, but he was also a friend of the great writer Jack London, socialist politician and writer Upton Sinclair, Irish playwright George Bernard Shaw, science fiction writer H.G.Wells, and Julian Hawthorne, son of Nathaniel. He co-formed the exclusive Los Angeles Country Club and helped establish the California Club, the city’s first private men’s club.  But Gay, as he was called by friends, is known primarily as the namesake for the most important thoroughfare in the history of Los Angeles.

Automobiles had yet to make an appearance and the Rio Porciuncula still had enough water to sustain a run of steelhead when Wilshire bought 35 acres in Los Angeles for $52,000 in 1895.   He filed subdivision papers announcing his plans to carve a wide magnificent boulevard, but his creation would travel just 1200 feet, then empty into trash filled brush. It was an abandoned barley field as recorded in “Hancock’s Survey of Pueblo Lands” ( Major Henry Hancock, father of Hancock Park’s founder G.Allen Hancock, was the city’s surveyor at the time). Gay had little to do with the growth of the boulevard and several attempts have been made to change the name of the street.   No one would suspect that Wilshire’s 4 block long dusty road would someday connect with El Camino Viejo and other fragments of Indian and Mexican dirt roads, become 16 miles of the grandest boulevard in Los Angeles, and lead us out of the horse drawn era. It would be the first to traverse the entire city, from downtown to the sea.

Having inherited a lot of dough from his father, Gay was known for his voracious hunger for the spotlight, and like a few gents I know, would erupt in long oratories almost always accompanied by groans by those surrounding. He was called the “Millionaire Socialist” but also was a grapefruit grower, gold miner, billboard mogul, inventor, publisher, and made and lost several fortunes. He ran for office at least six times and never won (including office for the British and Canadian Parliament).  His second wife Mary McReynolds studied with Freud and Jung in their early days and eventually opened a psychoanalytic practice in Brentwood. She became the primary earner of the family and bought one of the first homes in Palm Springs.

At first, the I-On-A-Co electric belt sold well, but the research institutions and doctors who supported it in the advertisements were made up. It turns out the device was a leather collar wrapped around eight pounds of meaningless wire coils that plugged into a wall socket.    The American Medical Association was hot on his trail when he called it a day on September 6th 1927.

Gay was quite the guy and we would do well to have more characters like him around us. So next time you roll into the H.M.S. Bounty bar (at 3357 Wilshire), when it

comes time to take a leak you will be doing so at the residential hotel “The Gaylord”, a once proud establishment named after Henry Gaylord Wilshire. Give the guy the nod and go back into the H.M.S. and pound three more.  Groove.