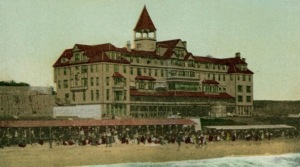 A gun, a prayer-book, and a lot of booze. Though we have all faced these non-grooves at one time or another, the facts are that together they will possibly ruin your evening (not always…but that is another story). Christina Griffith was confronted with this combo and it was none of her doing, but the doings of her loathsome scoundrel of a husband Griffith Griffith. Religion, a firearm, and enough alcohol to kill a Clydesdale was about to bring a big hurt on Mrs. Griffith Griffith.

It was the sultry evening of September 3rd, 1903 in Suite 104-5 of the fabulous Hotel Arcadia, the grand dame of Santa Monica. Built in 1887 it was named for Arcadia Bandini De Baker, who was the wife of the co-founder of Santa Monica, R.S. Baker (also where the name Bakersfield comes from). Located where the Loews Hotel is today, the narrow Arcadia steps with a gold painted archway  is all that is left of the original hotel. The Colonel, as he called himself (I have tried for years to be called the Chieftain or the Commodore but as of yet none of these names have stuck) though he never was in any country’s service, made his money when, as a reporter for mining stocks, he used inside information to amass millions. A tiny gent he made up for his lack of stature by carrying a gold-headed cane and was described as a “midget egomaniac” who had the exaggerated strut of a turkey gobbler. To endear himself to society he gave the city of Los Angeles 3015 acres – creating the largest municipal park in the world, Griffith Park. He was also one of those crazy hidden boozers who publicly aligned himself with the temperance movement all the while slurping down copious amounts of brown booze.

Any semblance of respectability and social groove came to a screeching halt that night at the Arcadia.  G.G., out of his head on booze, carrying a pistol in one hand and a prayer-book in the other, demanded that his wife kneel before him. Muttering something along the lines that she was aligned with the Pope to kill him he fires a shot point-blank into Christina’s skull, the bullet hitting her left eye socket and careening away. She staggers to her feet and leaps out the nearest window, falling two stories on to the veranda roof of the Arcadia. Not what one usually sees falling on a beautiful night in Santa Monica.

A sensational trial follows, with Griffith hiring the famous mouthpiece Earl P. Rodgers and the one-eyed Christina the ex-governor of California, Henry Gage. Rodgers puts up the “alcohol insanity” excuse (who hasn’t used that one before), but G.G. is found guilty only to serve two years in the Big House.

After prison Griffith offered the city $100,000 to build a popular observatory atop Mt. Hollywood (formerly Mt. Griffith, but had been renamed while in prison). He also offered $50,000 for a Greek Theater. Though the City of Los Angeles refused all offers because of his past, G.G. would not be denied setting up a trust fund providing for the two facilities after he was gone.

Well, the Colonel died rich, but unloved…and it shows one must consider all options and combinations before they step out into the evening.