A shot to the head gets your name on a map… 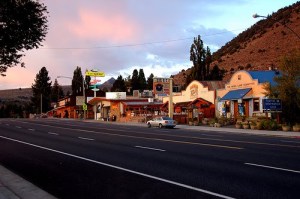 Hello, my name is Lee….Lee Vining. I don’t know why, but I’ve always wanted to say that to a fellow inebriated patron at a local establishment and perhaps I will someday. I recently spent a few hours in Lee Vining, which is off the glorious 395 on the way to Reno, Tahoe, and places further and wondered how the name of this small hamlet came to be.

Leroy Vining was not a bandito who committed crimes of the darkest hue like our friend Tiburcio Vasquez (of Vasquez Rocks fame) who was a terror throughout California in the 1860-70s and was finally captured in an adobe at the current location of La Cienega and Melrose Place in West Hollywood in 1874 . No, Lee was a miner who organized a mining camp in the area then had the misfortune of accidentally shooting himself to death in nearby Aurora, Nevada. After attempting to call the town Lakeside (sorry, already taken) and Poverty Flats (a realtors dream) the Powers that Be in 1953 settled on Lee Vining.

Makes you wonder: did Van Nuys trip on a stained carpet, fall down some stairs, and break his neck at his small sordid apartment off of Victory Blvd and then got the nod by the Powers that Be ?

Please, next time I am sitting next to you at a bar let me introduce myself: Lee….Lee Vining.